This site is dedicated to one of the most common inherited muscle diseases – FacioScapuloHumeral muscular Dystrophy (FSHD) also known as Landouzy-Dejerine disease. It will be interesting for:

Landouzy-Dejerine muscular dystrophy is the third most common hereditary skeletal muscle disease. It is characterized by quite recognizable clinical features as well as specific genetic mechanisms. For a long time in Russia, there were no possibilities for FSHD genetic test, but now it is possible. Moreover, Russian FSHD Patient Registry is being created in the Research Centre for Medical Genetics (Moscow). Please, find more detailed information about the goals and benefits of the Registry below.

Mikhail Skoblov (PhD) is the head of this project. The new method of FSHD diagnostics was developed at the Laboratory of Functional Genomics. 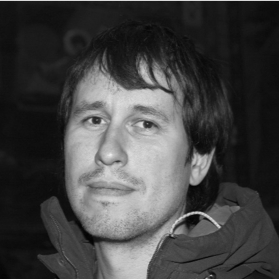 The Registry is a database that collects clinically relevant information about patients and their relatives.

What is a national registry for?

Who can be included in the registry?

1. A patient with FSHD which

2. Relatives of the patient

There are two forms of participation:

If you have been FSHD diagnosed by genetic tests, you can fill out questionnaires to assess your condition or contact us to include you in the patient registry.

Access to registry information is strictly limited and is not provided to third parties without the consent of the registry member.

Facioscapulohumeral muscular dystrophy (FSHD) also known as Landouzy-Dejerine disease is the third most common hereditary muscle disease. The estimated frequency of the disease is 1 in 14,000. Thus, the approximate number of FSHD patients in Russia is 10 thousand, but most of them are undiagnosed.

Most often, the first clinical manifestations of FSHD are observed in second decade of live. The facial muscles are the first to be involved in the process, followed by weakness of the shoulder girdle and upper arm muscles, the leg muscles are usually last affected. However, other variants of the disease progression are described. Therefore, it is important to contact a specialist for a detailed clinical examination and molecular genetic diagnosis. 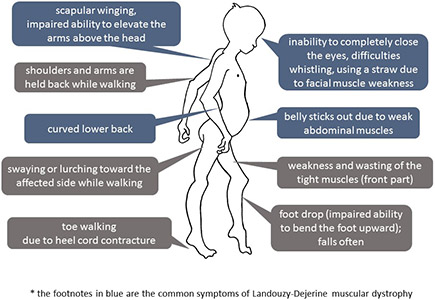 The staff of the Research Centre for Medical Genetics developed special questionnaires for the precise neurological assessment. There are 2 forms of participation in the registry for patients with FSHD: self-completion of questionnaires and a professional assessment of the clinical condition of patients. The patient's questionnaire allows to determine the prevailing symptoms, evaluate the onset of the disease, define the limitations in everyday life that patient faces, as well as obtain additional information about the condition. A professional assessment is made by a neurologist at free-off charge consultative appointments for FSHD patients at the Research Centre for Medical Genetics.

Responsible for the interaction with patients, their questioning and clinical examination is Dr. Aysylu F. Murtazina, MD. 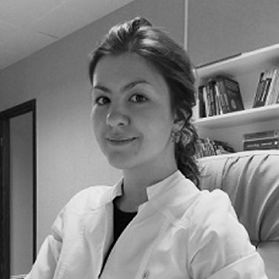 FSHD is usually manifested by weakness of the facial muscles, shoulder blades muscles, abdomen and back muscles, foot extensor muscles. This leads to restriction of the arm movements and gait disturbances. In some patients, the posture abnormalities are observed, usually, look like a large curve in the lower spine. This lumbar hyperlordosis and foot drop walking make up a specific walking pattern. Patients, as a rule, do not notice weakness of facial muscles.

In general, the severity of clinical manifestations is highly variable. Symptoms usually occur between ten and twenty years old, but the range of the age of onset varies widely from early infancy to fifty years. The course of the disease can be either mild or severe, it can differ even within the same family. Muscle weakness progresses slowly. After the age of 50, only 10-20% of patients need a wheelchair. Recent studies have shown that FSHD progresses faster in male adolescents and menopausal women.

The disease does not affect life expectancy in FSHD patients, with the exception of cases with early (up to 10 years) onset of the disease. Rarely, some patients may develop respiratory distress, which is more common in patients who need a wheelchair. However, spinal deformities in severe forms of the disease can also cause respiratory dysfunction.

In addition to the main symptoms associated with muscle weakness, other parts of body and organs can be involved. Sensorineural hearing loss develops in 25-65%. The remaining FSHD-related conditions (visual impairment, cardiac arrhythmias, epilepsy, mental retardation) are extremely rare.

Landouzy-Dejerine myodystrophy is inherited in an autosomal dominant manner, which means the possibility of inheritance from generation to generation on the maternal or paternal side. The probability of inheritance for each child of a sick parent is 50%. But in some cases, there may not be another affected person in the family if patient has a de-novo (new) mutation.

FSHD has an unusual pathogenetic mechanism. In 95% of all FSHD cases caused by a partial contraction of the D4Z4 macrosatellite array at least on one of chromosomes 4 in linkage with the 4qA haplotype. Such type of FSHD is called FSHD1. The number of the D4Z4 repeats on patient’s 4th chromosome ranges from 1 to 10, while a healthy person has them from 11 to several hundred. The D4Z4 repeats have a large size of 3.3 thousand nucleotide pairs. Because of this, an accurate analysis of their number by widespread modern methods of DNA diagnostics, including whole genome sequencing, is not possible. Therefore, other methods, such as Southern blotting and molecular combining, are used for FSHD1 diagnostics. Due to their specificity and high cost, these diagnostic methods do not exist in Russia. 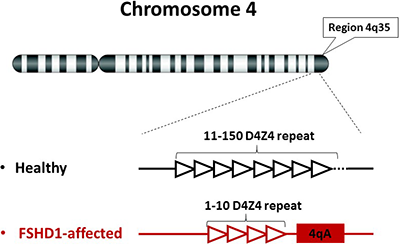 An alternative method has been developed at the Research Centre for Medical Genetics, using a quantitative polymerase chain reaction to determine the number of D4Z4 macrosatellite repeats. For FSHD diagnostics, fresh (unfrozen) blood in a volume of 10 ml in a test tube with EDTA is needed.

FSHD diagnostics is performed by a researcher Nikolai Zernov. 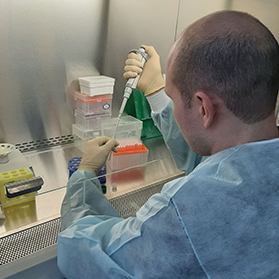 The linkage of the FSHD with a partial contraction of the 4th chromosome D4Z4 array was described almost 30 years ago. However, understanding of a molecular pathogenetic mechanism has occurred relatively recently. Until now, research teams around the world are intensively studying the ongoing molecular processes in normal and damaged cells. This is an important and necessary step that determines the strategy for developing treatment and cure strategies for the disease.

To date, there are many different approaches of influence on molecular processes, turning them into a normal state. It is possible to suppress or inactivate the work of certain genes, affect the stability and transport of some proteins, and even edit the genome. It is important to determine which strategy and which targets will be most effective.

There are some of the most prominent areas in the development of FSHD therapy:

You can ask all your questions about the Registry to Dr. Aysylu Murtazina by e-mail aysylumurtazina@gmail.com

For FSHD diagnostics, fresh (unfrozen) blood in a volume of 10 ml in a tube with EDTA is needed. The cost of the analysis is 25’000 RUB.

You can also leave a request for participation in the register by filling out a form on our website. After submitting the form, we will contact you.

This site was developed at the Laboratory of Functional Genomics in Research Centre for Medical Genetics.
For any questions or suggestions, write to mskoblov@gmail.com